The first Peony (tree Peonies – Paeonia suffruticosa) to be seen in Europe were introduced from China  in 1784 and their huge thornless ‘roses’ wowed everyone. 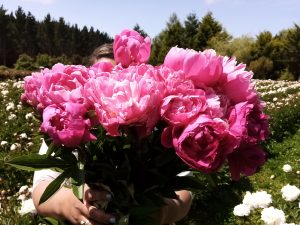 Pre 1800’s English and French nurseries were growing and selling herbaceous Peony (Paeonia lactiflora) sourced from China. The Chinese herbaceous peonies are among the world’s oldest garden plants. Chinese boys and girls exchanged them as tokens of affection in about the 6th century BC. 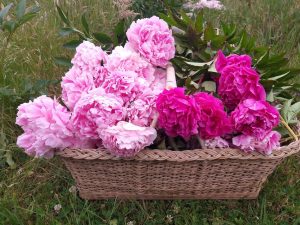 Native species that had been crossed in Eastern Mediterranean also appeared and these were the forerunners of the modern hybrids. In the early 1900’s,  American Peony growers started cross breeding in earnest and raising new cultivars from seeds, some of which are still popular choices in gardens today. 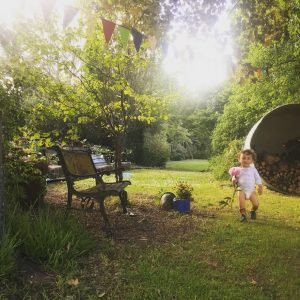 The dedication and love for Peonies of these gardeners and many others through the 20th century has given us a vast selection of colours and varieties to choose from. There are thousands of varieties of Peony, with many different flower types; simple singles, doubles, bombs, soft blousey blooms with collars and beautiful rose forms. Colours range from deep reds to the lightest pinks and whites through to cream and yellow. Blooms can be quite small, or the perfect  size for a vase, up to huge single cups and those breathtaking doubles the size of dinner plates.